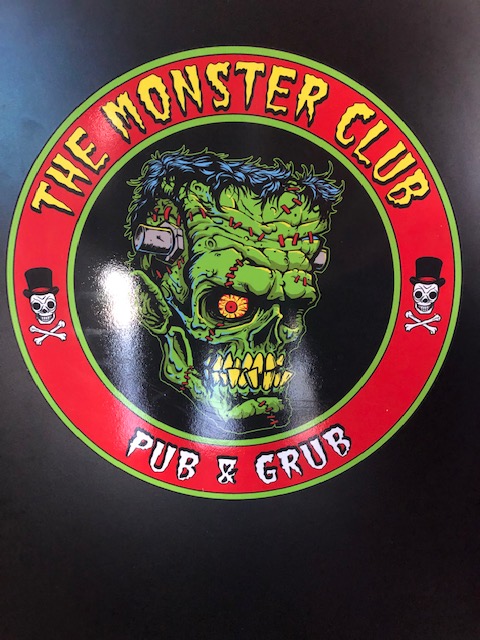 The Monster Club
1217 Howard St
Fare: Pub and Grub
Cost: $100 (including tip) for three drinks, three appetizers and three meals
Reservations: Not needed for our Thursday night visit, but unsure if they take reservations.

A week or so before we met up for this month’s research, my friend Becca sent me a text with a link to info about one of Omaha’s scariest new restaurant: The Monster Club in the the Old Market. Both of us being scary movie buffs and always looking for a reason to eat the new things, I invited her to be my special guest for this quarter and July’s post. We quickly pinned an evening that worked for all of us and met up on a recent Thursday night to find out if The Monster Club offered more than just a spooky vibe and niche place to eat. Was the food scary good or was it just scary?

As soon as I sat down, I loved every bit of the vibe. I even said something to Jac about “surrounded by all things creepy and I’ve never been more comfortable. What does that say about me!” And I told her just wait – Becca will be the same. While Jac and I waited for Becca to arrive, and as I sipped on a Kinkaider Snozzberry Sour and Jac a Guinness, I prodded our server for some behind-the-scenes info. She told us The Monster Club has been open a little over a month and is the passion-project brain child of the owner of Drastic Plastic. “The owner is a horror film buff and has been collecting most of this stuff since he was five,” she continued. Always wanting to venture into the restaurant business, The Monster Club is that dream come to unlife. (That’s a zombie joke of some sorts. Let it happen.)

Becca arrived just after we got our drinks, and 30 seconds after Happy Hour ended at 6pm, and before I could complete a sentence to ask her she said “Ohmygod I love the vibe and I feel so at home!” Right on target. Becca and Jac both had their mouths set on the Tempura Fried Broccolini and Caulilini with secret sweet sauce. The tempura coating and sauce gave it an Asian flavor — and they both claimed it was downright delicious. It sounded weird to me, but even I had to admit it was pretty good.

Initially timid about what Jac had ordered, I requested the fried cheese curds just to be safe. And even though I was pleasantly surprised with the Broccolini and Caulilini and it took top rank for my favorite appetizer, the cheese curds were just a standard comfort. Fresh, hot and plentiful, they are good but not a show stopper.

Becca was initially torn about whether she wanted a burger or the wings, as she considers herself a wing connoisseur. I kindly reminded her that she was my guest tonight so let’s enjoy those wings as an appetizer and – for the sake of the blog – the more we eat, the more we can write about. We ordered 12: half buffalo — a good point of measure against all other wings — and half salt and vinegar dry rub.

Part of me wants to put our thoughts on the wings at the very end of this post … because that’s when we got them: 5 minutes before we asked for to-go boxes and the check. Only the messenger and of no blame, when our server brought out the cheese curds and broccolini, she informed us our wings fell on the floor after they were done. They were making us fresh wings and they would be comped. Bummed for their absence but grateful for the kindness of making it right, we pushed on through our apps and the rest of our meal.

By the time the wings showed up, we were all nearly full. And honestly, the only bad part about getting the wings so late? The salt and vinegar wings were the most delicious surprise for me and Becca. Next time, I can see myself getting a serving of those for my main course. The buffalo weren’t anything mouth-altering and Becca is certain those were tossed in Frank’s Hot Sauce. So take note: go for the salt and vinegar wings. You’ll thank us.

Becca ordered the Southwest Burger: Guacamole, red onion, fresh tomatoes and pepper jack cheese – and she added bacon and a side salad. Becca thought the flavor of her burger was pretty good, but it doesn’t rise anywhere near the top of her best local burger list. It’s also worth mentioning that she ordered no bun, but received one anyway. And unfortunately, her side salad was nothing short of sad, wilted lettuce with a few toppings.

With a name like Monster Burger, honestly, I expected some sort of other worldly creation. (Think: Des Moines’ Zombie Burger). Described as a blend of chuck, brisket and short rib, the patty itself is probably one of the better tasting and most moist I’ve ever had. But in hindsight, The Monster seems to be their standard burger offering. Served with cheese, I had to pay to add the bacon. And without said bacon, it would have been a very simple burger. The burgers are good, but could offer more creativity.

Jac ordered the Western Burger — a patty topped with a crispy onion ring, applewood smoked bacon, cheddar cheese and sweet chili sauce. Overall, she said it was a solid burger. The blend of chuck, brisket and short rib gave the beef pretty good flavor. The only thing she noted that could make it better is swapping the sweet chili sauce for BBQ.

We all upgraded our side to sweet potato fries and are happy to have done so.

Pleasantly full, we were going to share the boozy Bananas Foster Milkshake. But to our dismay, they didn’t have any milkshakes.

“Funny story,” our server said apologetically. “Our bartender who came up with those left. And he took the recipes and fancy blender with him.”

Disappointed, but hopeful for trying them in the future, we topped off our evening with Ted and Wally’s instead.

Rating The Monster Club is two-fold.

First, the ambiance. They nailed the old school monster vibes they’re going for and clearly – that’s the first thing that’s going to bring you in the door. From the hundreds of collectibles, coffin-shaped table tops, castle walls, torch lamps, skull chandeliers, monster music, monster movies, life-sized monsters standing and coming out of the walls, monogrammed glassware and even skull-patterned silverware. Down to every last detail, we were impressed. We give them major kudos on decor and that alone is worth a first visit. But we had to decide if the food and overall experience was enough to get us back for an encore?

Jac gives her grub choices a fork up. She loved her appetizer and (mostly) enjoyed her burger.

Becca and I, however, have to give the club a few forks sideways. Our apps and burgers were all relatively boring from start to finish. As it stands now, it’s hard to pick something off the menu and say “if you’re in the Old Market , you MUST try the…” at Monster Club. It almost maybe might be the brocollini – but when does broccoli ever get people lined up out the door?

And our visit had one too many bumps in the night to be an enthusiastic fork up: the wing woopsie, the lackluster burger creativity, the lack of dessert despite the boozie shakes being in a custody battle.

Becca and I stand by our sideways rating but can still both say we’ll be back. We know there’s a few things on the menu we’ll enjoy and maybe by then they’ll have worked out all of those “new restaurant” nightmares that killed the buzz we got from the theme and decor.

One thought on “The Monster Club: Cool Pub, Okay Grub”