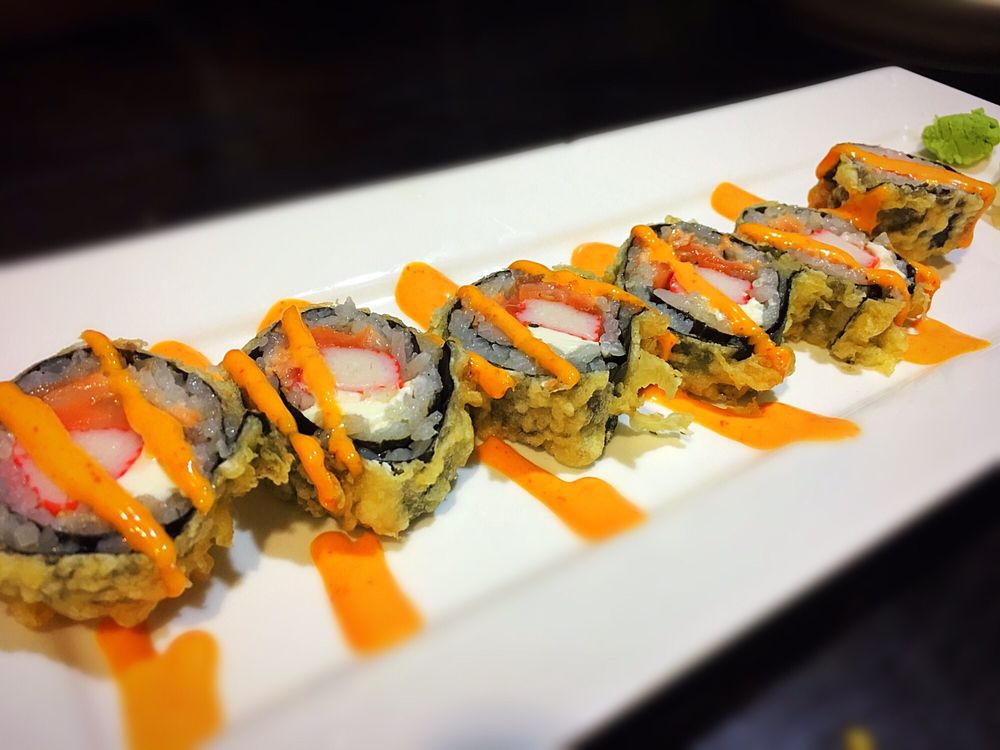 Bellevue, Nebraska is probably most certainly not an area one Googles (maybe even considers?) when hunting for mouth-changing culinary experiences. And I don’t say that lightly. But now that I find myself a Bellevue resident (6 months!), I’m somewhat determined to fork my way through the 68005 and help send people this way as often as we all make the trek into Omaha proper and their various trendy neighborhoods.

Smack dab in the middle of chewing on ideas for THIS SHINY NEW BLOG YOU’RE LOOKING AT RIGHT NOW (sorry – we’re real jazzed…) – I remembered an Omaha World Herald article about Umami’s owner and Chef Keen Zheng packing up his life in New York City and unpacking glorious sushi and Asian cuisine right here in Bellevue. I can’t say it never crossed my mind on moving day that I was finally within striking distance of such an anomaly. And finally, on an otherwise uneventful Saturday (see: couch surfing session with Jac, hashing out these new exciting blog ideas) – it fell out of my mouth that we were just down the road from Umami.  Among a million other things, Jac and I agree: sushi always sounds good.  The desire was strong enough for me to don shoes and a bra and leave the house. Honest blog research was calling our names, after all!

We each picked our favorite Asian appetizers: Pork Goyza for me and Crab Rangoon for Jaclyn. Does Umami do anything special with these Asian restaurant staples? No. But they were nearly perfect in their execution all the same. Both still hot when they arrived, the crispy-bottomed dumplings weren’t too doughy, and the crab Rangoon offered warm creamy insides with visible lumps of crab and a fried exterior that complimented the filling, not overpowered by it or made us work to eat it and enjoy. (See: overly hard exteriors that hurt my mouth. Am I alone with that?!)

By the time our server came to take our order, Jaclyn had only picked the Crunch Roll and asked the server to recommend another. Asking if she liked sweet ones (she does), he pointed towards the Coconut Shrimp. Not wanting to waste anymore of his time, she said sure.

Holy. Coconut. Batman. The shrimp was covered in coconut. The roll had coconut milk drizzled throughout. And it was topped with coconut flakes. Jaclyn decided to brush off most of the shaved coconut that she could (she assumed only the shrimp would be coated in coconut), but she didn’t think it was too bad. The fuji apple added an interesting contrast in texture with the smooth avocado. Overall, her ‘okay’ feelings towards this roll were reflective on her “panic ordering reflex” (she’s working on this), and not the roll itself.

The Crunch Roll served as a nice palate cleanser. It had mixed crab, avocado and tempura flakes. Like a California Roll, the flavors were tame, but good. Jaclyn’s biggest regret was choosing rolls without eel sauce.

My eyes landed on probably the least sushi-proper offerings on the menu but, partnered with Jaclyn’s choices, I knew I wanted to get my taste buds on rolls I hadn’t yet tried.

The New York roll was the standard roll sushi dreams are made of – for this girl, anyways. Crab, cream cheese, then deep fried and married with an eel sauce drizzle – it was a creamy, dreamy delight with every bite. And it helped Jaclyn fill her eel sauce void.

The BBQ Omaha Steak Roll seemed like Chef Zheng’s hat tip to his new home. This roll is what happens when Omaha meets Okinawa – sort of. Crab, tempura, avocado, fried potatoes – blanketed with seared steak and a garlic soy sauce – it was beyond good. I can’t help but think maybe it’s a roll you offer to people when they’re new to sushi and have visions of raw fish and various fish roe. It would win them over and, hopefully, encourage them to continue their sushi adventure.

With a focus on sushi and hibachi grill features, Umami’s menu also offers other Asian staples. We were only going to get sushi, but then Jaclyn saw the Pad Thai and in the name of proper research, we added it to our order.

Jaclyn is a self-admitted spice wimp, so I compromised on a lower spice level. And beef instead of my default chicken. And peanuts on the side instead of delightfully mixed throughout. Okay, so Jaclyn kind of does Pad Thai wron—erm, her own way, but as a lover of noodles, I took one for the team and resolved to enjoy whatever hit our table.

Delicious but standard, the Pad Thai is a ‘take it or leave it’ menu item. Umami’s passion and heart is in their sushi – so make sure you’re giving the stars of the show their due time and attention. I’ll give Jaclyn this – I need to incorporate deliciously flavored beef into more of my dishes and fight the urge to go with my usual chicken.

According to Merriam-Webster, a Japanese scientist was the first to discover the savory taste of the amino acid glutamic acid, which was found to occur in soup stocks made with seaweed. This fifth basic taste – alongside sweet, sour, salty, and bitter – was named umami, meaning “savoriness” in Japanese. In culinary circles, the most delicious and well executed dishes often have this almost unnameable quality – meaning it satisfies one’s palate on every level. Maybe even levels your palate didn’t know it needed satisfying.

Owner Keen Zhang works hard to make good on his restaurant’s chosen name. Focused on doing everything in house, the New York trained chef didn’t lower any bar to do what he does in the middle of America. He raised it for everyone around him. I for one am so excited and grateful he took a chance on Bellevue. We hope you’ll take a chance – and a drive – to check Umami out for yourself.